Our research group at the Physikalisches Institut of Heidelberg University performs fundamental research in the fields of quantum and atomic physics. In our experiments, we use ultracold atom clouds to understand how complex quantum systems behave. In particular, we are interested in questions related to how strong interactions, reduced dimensionality (1D and 2D) and finite system size affects the physical properties of a quantum system. More information on current research projects and the experimental setups can be found here.

Here we directly observe Cooper pairs in a mesoscopic two-dimensional Fermi gas. We extract the full in situ momentum distribution of a strongly interacting Fermi gas with single-particle and spin resolution. Our ultracold gas enables us to freely tune between a completely non-interacting, unpaired system and weak attractions, where we find Cooper pair correlations at the Fermi surface. When increasing the attractive interactions even further, the pairs gradually turn into deeply bound molecules that break up the Fermi surface. With the precise control over the interactions, particle number and potential landscape in our experiment, the observables we establish in this work provide an approach for answering longstanding questions concerning not only such mesoscopic systems but also their connection to the macroscopic world. Read the paper here, .

Congrats Marvin! Recently, Marvin finished his thesis "From Pauli Blocking to Cooper Pairs: Emergence in a Mesoscopic 2D Fermi Gas". How does collective behavior and superfluidity emerge in a mesoscopic 2D Femri gas? Working on this question, Marvin found a quantum anomaly, describing the violation of a classical scaling symmetry in a macroscopic Fermi gas. Afterwards following a bottom up approach, Marvin worked on small systems of 12 Fermions. Measurements of the excitation spectrum and momentum correlations lead to the discovery of a Higgs mode, the Pauli crystal and of Cooper pairs. Last but not least, Marvin and Luca set up our experimental control during their PhD. Read the thesis here.

We report on the direct observation of Cooper pairs in a mesoscopic two-dimensional Fermi gas. Our imaging scheme enables us to extract the full in-situ momentum distribution of a strongly interacting Fermi gas with single particle and spin resolution. The Cooper pairs appear as correlated particles at opposite sides of the Fermi surface. Read the paper here.

Congrats Ralf! Recently, Ralf finished his thesis "Correlations from Microscopic to Macroscopic Quantum Systems: Interactions vs Indistinguishability". He developed a novel high fidelity single-particle and hyperfine state resolved imaging system which was used to quantify strong correlations and entanglement in microscopic systems of two or three atoms in optical tweezers. Based on this, the preparation of deterministic mesoscopic quantum systems, given by up to twelve particles in a two-dimensional harmonic oscillator potential is described. Read the thesis here.

Our group led the Physics Institute’s effort to create an emergency ventilator to support patients suffering from COVID-19. The design of the HDvent Emergency Ventilator has now been published and full details are available open source .

"Physik unserer Zeit" is a german magazine for physics students, teachers and others being interested in physics. In six issues per year, phenomena and new findings from all fields of physics are reported. We are proud to announce that our findings about "Pauli Crystals" and the "Higgs Mode" draw the attention of the editors and that the results got published in the current issue .

In this paper so-called Pauli crystals as a manifestation of higher order correlations were observed. In contrast to true crystalline phases, these unique high-order density correlations emerge even without any interactions present. Our work lays the foundation for future studies of correlations in strongly interacting systems of many fermions. Read the paper here

Our paper about a few-body precursor of a quantum phase transition from a normal to a superfluid phase was published in Nature. The transition is signalled by the softening of the mode associated with amplitude vibrations of the order parameter, usually referred as the Higgs mode. Used were mesoscopic systems of up to 12 atoms in closed shell configurations of an harmonic potential. Read the paper here

The relationship between symmetrization and entanglement was explored through measurements on few-particle systems in a multiwell potential. We measure and distinguish correlations arising from two different physical origins: antisymmetrization of the fermionic wave function and interaction between particles. We quantify this through the entanglementnegativity of states, and the introduction of an antisymmetric negativity, which allows us to understand the role that symmetrization plays in the measured entanglement properties. Read the paper here

Philipp Preiss has been awarded an ERC starting grant with the title UniRand - Random Unitaries in a Rapid Optical Lattice Simulator. Philipp will start a new project to look at many-body physics and random measurements in random bases in optical lattices. Please contact him ( Preiss) directly if you are interested in joining the project as a PhD or Masters student.

In this theory paper, we study fractional quantum Hall states that form in few-fermion systems in rotating traps. We find ground states that are very similar to magnetic skyrmions in condensed matter systems. The work was led by Master’s student Lukas Palm (now U Chicago) and in collaboration with Fabian Grusdt (TU München). Read the paper here.

Luca finished his PhD. Luca investigated the emergence of many body physics in two dimensional few fermion systems. He found few body precursors of the Higgs mode in closed-shell configurations of 2, 6 and 12 atoms. By measuring the momentum distribution of up to 6 non-interacting fermions in the groundstate of the 2D trap he showed that the group can access the momentum distribution with single particle resolution. Read the thesis here.

Our paper on the Quantum Scale Anomaly has been published in Science. In this paper we study momentum-space profiles of 2D superfluids and show that the quantum anomaly modifies their dynamics in the regime of strong interactions. Read the paper here. 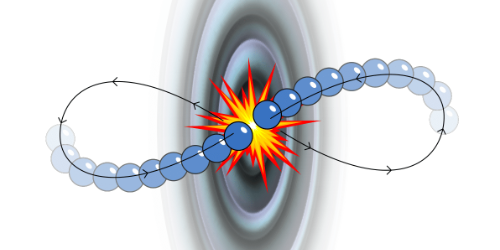 We recently published two papers in PRL. In the first paper we studied the dynamics of two atoms released from an optical tweezer into a large optical dipole trap with inverted aspect ratio. The project was done in collaboration with Qingze Guan and Doerte Blume from the university of Oklahoma. Read the paper here.
In the second paper we study momentum correlations between independently prepared identical fermions and characterize a source of three independent particles by measuring and analyzing the third-order momentum correlator. Read the paper here.

Our recent paper about our new imaging scheme has been published in PRA and has been selected for a PRA editors suggestion. Read the paper here. In the paper we presend a method to image single Lithium atoms in free space in a spin-resolved way. This will enable us to measure single-atoms resolved momentum correlation functions of mesoscopic fermi systems.

Our recent measurements from the 2D experiment on pairing in the normal phase of a 2D Fermi gas have been published in Science. Read the paper here.

Vincent recently finished his PhD thesis. His thesis describes recent measurements of momentum correlation functions and entanglement in fermionic few-particle systems. The measurements were performed with our new spatially and spin-resolved, single-atom sensitive imaging method. In particular, Vincent studied the expansion dynamics of strongly interacting Fermi gases and the growth of correlations in the ground state of a double-well potential. The thesis can be found here.

Please check out the upcoming conference Beyond Digital Computing: The Power of Quantum and Neural Networks, which will be held at the International Academic Forum (IWH) Heidelberg from 19 to 21 March 2018. This collaboration between the STRUCTURES initiative, the Physics and the Kirchhoff Institute will bring together experts on quantum simulation, neuromorphic computing and machine learning.

Mathias and Andrea recently finished their PhD theses. Mathias' thesis describes the observation of many-body pairing in the normal phase of a strongly interacting 2D Fermi gas in the BEC-BCS crossover using a spatially resolved RF spectroscopy method. Andrea's thesis investigates the preparation of strongly correlated few-particle fermi systems and the measurement of their momentum correlations with spin-resolved single-atom imaging.